Here we are on the last day of September, and weather-wise, it could be any day in early June. Except better, because in June you don’t have the crisp feel of the air as it blows through the drying leaves, sending them fluttering to the ground like golden confetti. You also don’t have the golden tint to the light, perhaps enhanced by the changing color of the leaves or the decreasing angle of the sun. And wafting through the air there is the faint smell of dried leaves and smoldering fires. It’s definitely autumn, but it’s warm enough to be early summer… a day to be savored.

Out in the gardens, the monarchs still fly from flower to flower, but now with a sense of urgency.

Most likely it’s my own mind silently urging them to quickly eat all they can and head south before the weather changes. The hummingbirds are still here, too, although it’s hard to know if they’re the same hummingbirds that I saw last week. The tree frogs still sing and the mosquitoes still bite; summer–in its early fall form–is still here.

Our gardens continue to bloom, with the zinnias showing their usual impressive staying power and the marigolds exploding with rusty-orange blossoms. 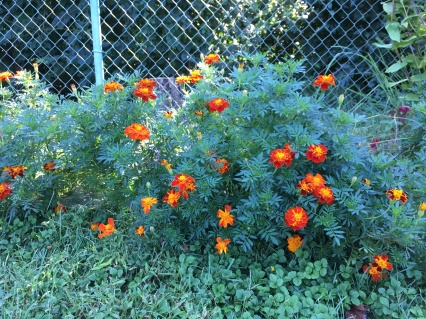 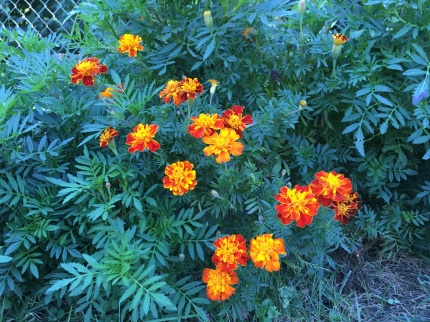 We’ve solved a few mysteries, too. In letting some of our garden areas “go native,” we inevitably end up with a few plants that we can’t identify… at least not at first.

Early this spring, two plants grew quickly in our gardens. In past years, I would have said, “oh, weeds,” and pulled them immediately. But this year, in the spirit of gardening adventure, we decided to let them grow and see what they would become. Even though they were familiar-looking “weeds,” we didn’t know what they were. So, we waited. And we waited. And the plants grew and grew. By the end of July, they showed no signs of blooming or even forming buds, and the leaves had been no help in revealing the plants’ identities. By the end of August, there was still neither bud nor bloom.

Finally, around mid-September, there were signs of both–extremely tiny buds on one plant, and faint yellow flowers on the other. The yellow one is, of course, goldenrod, and what a spectacular plant it is! It has produced a spectacular array of tiny yellow flowers, often looking like Nature’s own fireworks display.

The other one, more subdued but still beautiful, is the white aster. Slowly but surely, this plant is becoming awash in dainty white flowers. 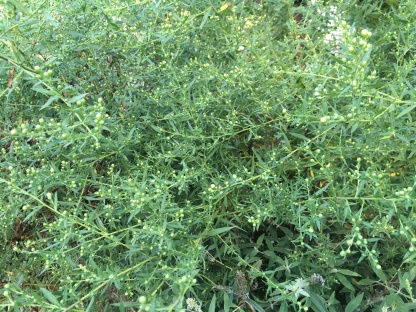 In another week, it will be fabulous. Love the late bloomers!

We had a real surprise this morning. As I was looking to see what happened to our compass plant (it just didn’t do too well this year), I noticed some bright white densely clumped flowers among the tall grasses. I had seen these before–white snakeroot!

This was exciting because we had not planted it (like the jewelweed… see earlier blog post) AND it has an interesting story/legend attached to it.

White snakeroot (ageratina altissima) is a member of the aster family and is poisonous. It contains tremetol, a substance that can cause “milk sickness” when you drink milk from cows that have eaten the plant. The story is told that Abraham Lincoln’s mother died from milk sickness, along with many early European settlers in North America. The plant stem and leaves are apparently very bitter, but I guess the cows will eat it if there’s nothing else. It’s beautiful, though. Again, our philosophy is let things go and see what happens. Always interesting! 🌼

Yesterday, it rained. With the rain came cool, soft air with a strong hint of fall. Joe and I thought it was a bit like Vancouver weather–grey, misty, mysterious. It was the perfect weather for soup, and the restaurant where we were dining served up an amazing bowl of ramen noodle soup. Joe is going to make it at home–his own version, of course, which is never the same twice but always wonderful.

Today, the sun, heat, and humidity have returned, and soup of any kind no longer sounds good. A cool beer on the back patio is what is required today.

Now, at the tail-end of August, our willow-leaved sunflower is beginning to bloom. 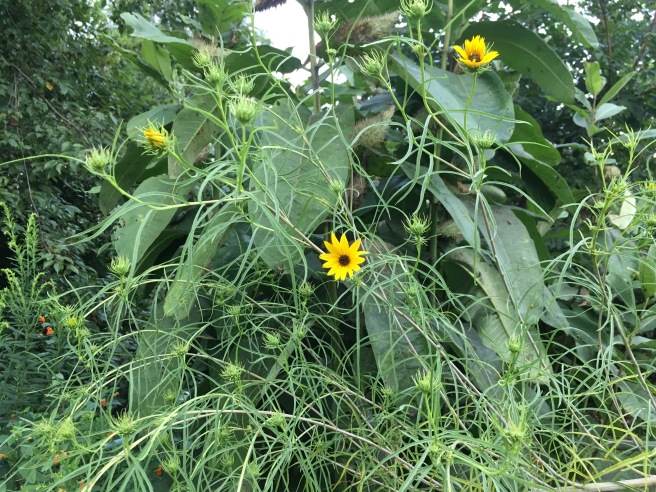 This tall, gangly, narrow-leaved prairie plant spends the entire summer growing taller and taller, outdoing the common milkweed and the other sunflowers. It really looks like some alien life form, reaching out to catch something… anything… 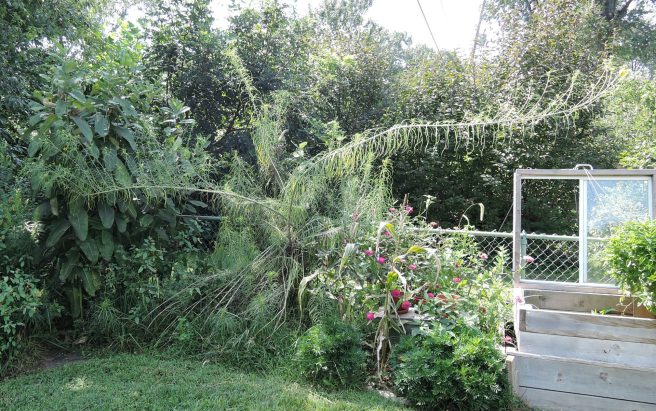 Most likely, it’s simply reaching for sunlight. Over the years, our trees have grown, and more and more of the flower beds are shady for a good part of the day. Every year, the garden is a little bit different.

For instance, we have jewelweed in the back corner garden for the first time this year. 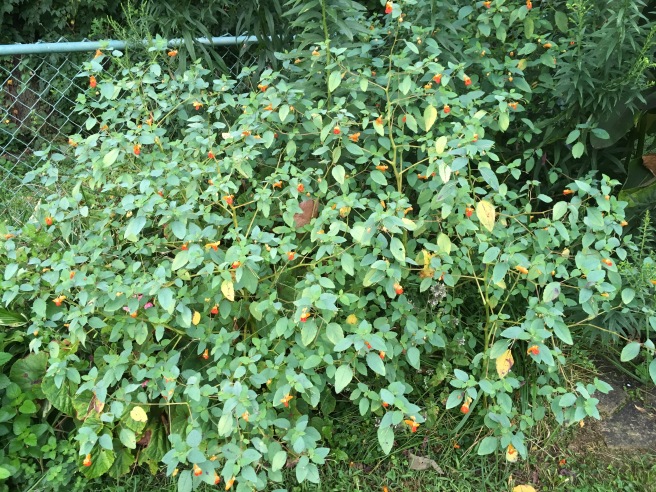 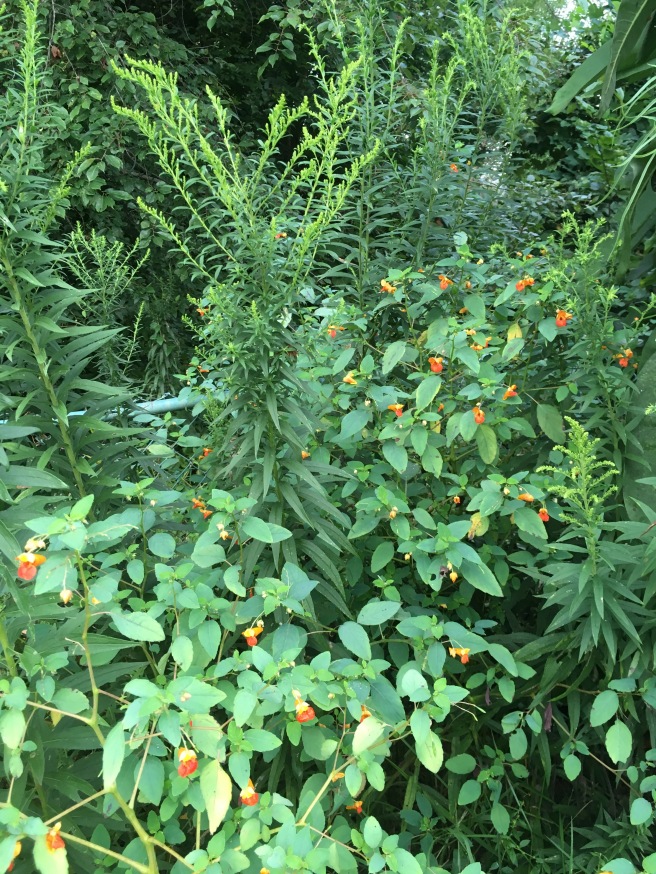 It arrived and grew on its own, as many interesting plants do, and now, in late summer, it is full of small dark-orange flowers that the hummingbirds love. Today, there have been three or four of these helicopter-like birds buzzing up and down, left and right, forward and back, throughout the patch, stopping briefly in front of each flower to gather some refreshment. Often, a bit of a fight breaks out as the pressure is on to bulk up before the long flight south.

We’ve also had the stunning goldfinch stop by the sunflowers and the zinnias. When he sits on the willow-leaved sunflower, he seems to be just another yellow and black bloom, swaying gently in the breeze. You have to look twice to notice him. 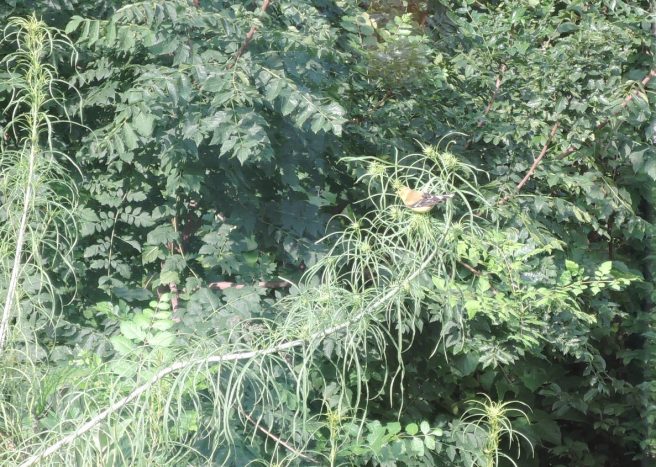 There’s a lot of eating going on out in the garden these days, and I hope there will be some seeds left for us to gather… but I think we have enough to share.

By this point in the summer, our cardinals are raising their last set of young. I can hear them chittering and cheeping each morning in the neighbor’s arbor vitae, which seems to be their favorite nesting place. The parents make good use of our nearby vegetable garden, scouring the tomatoes, tomatillos, and eggplants for caterpillars to take back to the nest.

We won’t see the young cardinals for another few weeks; cardinal parents are very cautious. But, their energetic squeaking and the quick rustle and shaking of leaves lets us follow them as they venture away from the nest. Soon, they will appear alongside their parents on the garden fence, making their first attempts at finding their own caterpillars. 🐛